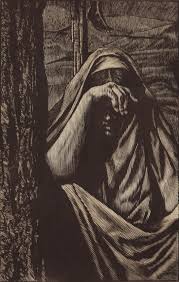 What a woman! What a mother.

If you don’t know the story of Rizpah or have skipped over it whilst reading your Bible, go back and take another look.

If, like myself you have a broken family, children who have rejected Christ and are dead in sin, then Rizpah is a woman that you can relate to

I have spent endless hours and years trying to find ways to lead my children to Christ. I have travelled mile’s to show them I love them and forgiven hurts, cancelled debts, given gifts and of course prayed for them. But I wonder now if I had the same passion for my children that this woman had.

I have prayed like Hannah, and given my sons to the Lord.

I have begged Jesus, like the woman asking for scraps from the table of the Lord. I have begged, cried, hurt and withdrawn. I’ve taken antidepressants, lashed out at those who’s lives seem better.

Been envious of those whose children love them, honour and have relationships with them.

God has dealt severely with me at times over this and until recently I had been going about it all wrong. what were my motives?  Did I want a pew full of squeaky clean well groomed robots?

The goal of our prayer for ourselves is to love the Lord with all our heart mind strength and put him first above all else.

If we aren’t glorifying God then what are we here for?

If my children are to follow Christ it has to be, because they want and desire Him. I don’t want them to have a lukewarm relationship, they might as well be where they are right now.

In brief, Rizpah was a concubine of Saul and becaus

e of Saul’s broken vows and disobedience to God, his sons were used as public disgrace. They were hung in full view as a warning. it is a terrible shame for a body to be left out like a criminal. It was nothing they had personally done; they were innocent just as our Lord was innocent. However they were chosen because they were Saul’s sons. Now this event appeared to me as a most depressing and dark story when I first took a good look. And I thought

“EWWW”. I couldn’t bear to stand by watching my boys decay like that. It was difficult for Mary to see her son suffer but I imagine it was most horrific for Rizpah.

She fought vultures and carrion by day and wolves by night. She would allow nothing to touch her dead sons’ bodies. She also protected the others who hung there.

She laid sackcloth over a rock and sackcloth represents repentance? So was she interceding for the nation or had she hope of the resurrection to come through our Lord and Messiah?

There is little written about her thoughts or words, but her dedication was heard of by King David and he gathered the bones of Saul’s other sons for Burial when the time came that the bodies were allowed to come down.

I wonder what God said to her through this time. I don’t believe he would leave her comfortless. For mothers, there are times when we feel desperately alone. And the world probably looked on her with scorn but here is where it began to inspire me. It was as if a light bulb went off within my soul.

God showed me that these bodies are the same as my lifeless (spiritually) dead children.
I pray for them,yes, but have yet to intercede to even the minutest part as long as this woman held vigil.

Yes added up over many long years I have cried and interceded for them. But it became clear to me that the enemy who prowls around seeking to devour is just as rabid and ravenous as these creatures in that day. I have to pray without ceasing that’s clear from the Bible, but its clear to me that I must ask the Lord to teach me to be faithful in this way.

Over the years I have met many mothers in similar positions to myself.  One thing many people tell us is, let go and let God! or, give them to Him and leave them there! this all sounds great in theory and seems easy enough.

But I know that the Bible says some things are to be asked for with faith, some come out by prayer and fasting, ask , seek , knock.  And whilst I know that my Father knows my needs, he also says I must share in his sufferings.

Part of my prayers for my children touches Him right where he is at, with the human race. Lets face it many are called and few are chosen, He wept over Jerusalem, He wept in the garden for all those who would reject him in the future.  He didn’t say “well God I did my bit, now its up to you”.  What does Jesus do even now for each and everyone of us? He intercedes on our behalf to the Father night and day.

As Rizpah was heard by King David, and he was moved to compassion, So much more is my Father and King a God who hears.